In this lesson we will be taking a look at Double Tops. The definition is simple enough, yet the nuances you’ll encounter identifying price points can get a bit confusing, and are easy to misunderstand.

The double top is first and foremost a reversal pattern. This means that whatever the direction the trend was going when the double top formed can be expected to reverse once the pattern is confirmed.

Price, volume and time are all key components when identifying a double top.

Double tops are one of the more frequently seen reversal chart patterns you will come across. They are identified by two peaks, at or near the same price level, separated by a trough in the middle. 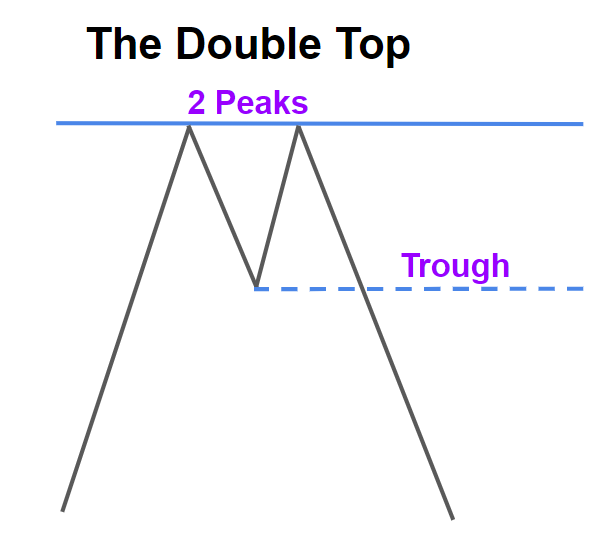 Prices at the peaks do not have to be an exact match, in fact it’s actually kind of rare when that happens. It’s pretty customary for the second peak to go a little higher than the first peak and blow out some stops before starting to fall back again. This is what’s commonly referred to as a “bull trap.”

It’s not unheard of for the second peak to fall short of the first peak either. This is a signal that buying power is drying up, and you should start looking at the volume pattern to make sure it’s matching up with price action.

The first peak should be made on significantly higher volume than the second peak, and a decrease in volume should be noticeable when the trough is formed. Time also needs to be considered. The longer it takes for the two peaks to form, and the deeper it is from the trough to the peak, the higher the probability is for a reversal.

A price bar closing below the trough on heavy volume will confirm the reversal.

How to Trade a Double Top

The measuring objective for a double top is the distance between the lowest point of the trough and the trendline connecting the two peaks. This distance should then be measured downward from the breakout point to determine the price objective.

Confirmation of the double top must be made with a price bar closing below the lowest point of the trough before a position should be initiated.

The support area where the trough was formed turns into a resistance level after the breakout has occurred, and it’s common to see a retest of this level before the price objective is met. More aggressive traders will often use a retest as an opportunity to add on to their position if the volume and time patterns are also signaling a strong probability of trend reversal.

There are many schools of thought out there when it comes to stop placement. The truth is, there is no single definitive, or correct, answer. However, we do have access to enough historical market data to make educated guesses.

The most obvious solution would be to place a stop at new highs, but we all know how the market loves to make a run at obvious stop levels, and it will also drop your risk to reward ratio down to 1:1, which many traders try to avoid.

Some traders will use the 50% retracement of the measured move, bollinger bands, or even short-term moving averages to determine stop levels. These are all acceptable from a risk management perspective, so your best bet is to already have a plan mapped out before initiating a position, and stick to it.

It’s difficult to identify a double top in mid-formation because of the possibility that price is stuck in a consolidation period and the trend may continue higher. The trough is an important support area while the double top is forming, and can sometimes lead to the formation of another pattern, like a rectangle or a triangle.

This is why it’s so important to wait for price to trade through and close below the trough support area for confirmation. It’s easier to avoid being trapped in a false breakout scenario if you play this setup by the book.