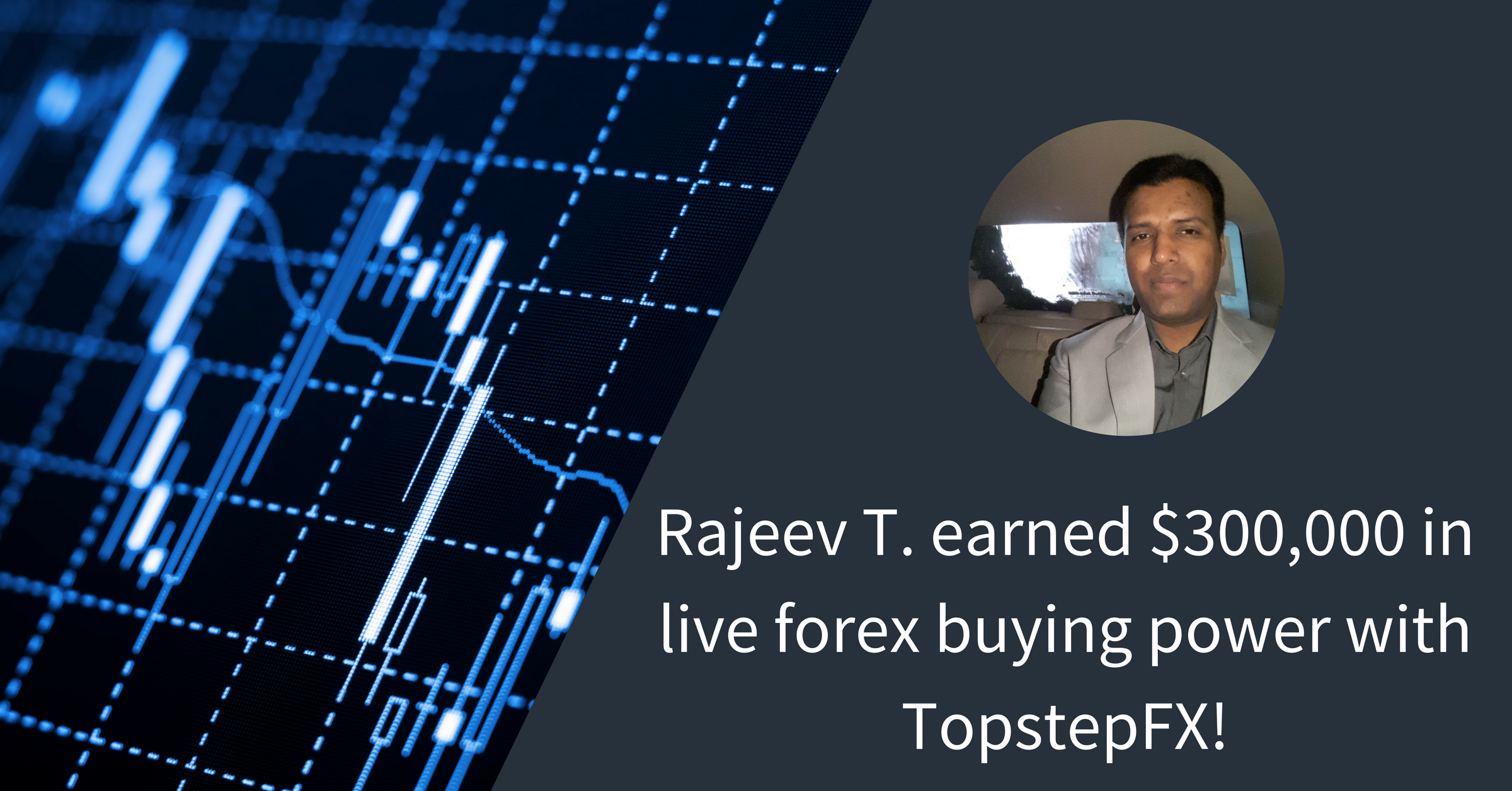 Like most of us, Rajeev T. in India learned the hard way that trading is challenging. He’s been trading financial markets (primarily the Indian stock market) for more than five years. Looking back, he realizes that he didn’t have a plan. Instead, he said that he relied on news that he saw on TV to trade. And that led him to the same place: blowing up account after account.

Rajeev said that all changed in September 2016 when he realized that if he kept doing the same things, he would get the same results. That led him to a study of technical analysis, trading psychology and risk management. Less than two years later, he’s found his stride and earned a TopstepFX Funded Account® with $300,000 in live forex buying power. Here’s how.

It’s All About Greed & Fear

Rajeev said that more than anything else, it is critical that he understands and connects with his emotions, specifically greed and fear. That self awareness helps him in all aspects of trade management — from when he decides to get into a trade through when he closes the position out.

“Now, I always try to be aware of my greed before placing a trade and fear when I am in the trade. I have realized that even if my analysis turns out to be correct, I eventually lose because of my greed or fear.”

He has created a couple hacks to help him connect with his feelings and manage the emotional roller coaster of trading. First, he doesn’t look at his open P&L. Instead, he focuses on the chart and what the technical movements are telling him. Next, he understands that if he is feeling these emotions, other market players are also feeling the same emotions. That impacts how the market will move. For example, Rajeev observes that even if the price is going higher, often times, “it will not go up easily.”

Search for a Strategy — Technical Analysis

“I have had many setbacks in trading. I have blown up my trading capital several times in the last five years as I used to trade purely based on recommendations on TV channels and without knowing my trading psychology at all. Finally, I thought if I keep trading this way, I will keep blowing up my trading capital again and again.”

Rajeev doesn’t simply look at charts to get a feel for price action, but he has become a student of technical analysis. This was the revelation that he had in September 2016.

Now, he knows his strategy well.

“I make trading decisions purely based on price action, chart pattern and some other technical tools (like wave analysis, Fibonacci ratios and the 20-period simple moving average). I believe that if you know how to read price action on a chart, everything else is just noise.

For stops, I base them on swing highs and lows on the hourly chart. Generally, I give myself 20 to 30 pips of room, which can be a little larger. So, I won’t start trading full standard lots, but instead go with half the size and them move my stop as those swing highs or lows change.”

The third key to Rajeev's recent success has been working on his risk management.

"The most important thing that I have learned while trying the Trading Combine® is risk management and discipline. Technical analysis and trading psychology all culminate to a proper risk management process. Without that third key, a trader can very easily lose money."

But even though he's earned his goal of a Funded Account, Rajeev is still trying to improve. He said that he is utilizing chart replay and tutorials to work on improving his price action reading skill.

Advice for Other Traders

Given his experience, Rajeev’s advice for other traders is perhaps unsurprising:

“First, I would recommend that they work on their ability to understand price action and chart reading, without placing too much importance on a bunch of indicators. Trading is complex pattern recognition — not simply doing what a candlestick pattern might recommend.

Second, it’s critical that you know yourself very well and allow that feedback to dictate your actions. For me, that’s all about knowing when I am getting greedy or fearful.”