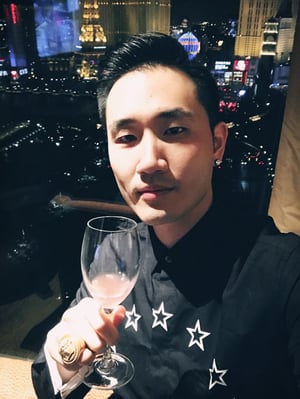 Some people think traders need to grind it out all day, every day. Not Chi C. of Bellevue, Washington. He never wanted to be one of those people who trades all day, every day, so he developed a strategy that fit his way of thinking and had the potential to give him the financial freedom and flexibility he was looking for.

In many ways, Chi is well on his path to success. He only trades Crude Oil ($CL) its volatility allows him to capitalize on a short trading window, just trying to be active in the market between 6 AM and 9 AM PT. Even then, he says he usually finishes his trading day by 7:30 AM.

In more than two months in a Funded Account®, Chi averages nearly $200 each day he trades (winning and losing days included). To put that in perspective, that’s $50,000 annually — working just three hours!

Here’s how he did it.

Want to join Chi in a Funded Account? Get started with TopstepTrader today!

1. He Doesn’t Take a Position Unless His Win Potential Is Bigger Than His Stop Loss

“Risk-to-reward is the holy grail of trading.” according to Chi. He must have seen why we call it the most important metric in trading. For him, that means:

Chi’s decision to focus on long positions came about because he studied his losing days closely. He realized he was “horrible” at trading down-trending markets so now he avoids those days. Even though he makes money on just 48 percent of trades, he is profitable on 60 percent of his trading days. That’s the best sign of great risk-to-reward!

What you can do: Chi recommends traders find their weak spots so they can trade on days that work to their strengths.

2. He Doesn’t Trade Too Much

Chi’s recent realization about playing to his strengths made him completely rethink his strategy. He increased his risk just a little and reduced the frequency of his trades. That move, he says, helped him become a funded trader that averages $200 each day he trades.

What you can do: “Remember,” he says, “we do not need to trade everyday to be profitable at the end of the month.” He suggests trading less and in a higher time frame. (Related reading: Stop Fighting the Market: How to Capitalize on and Profit from the Trend.)

3. He Doesn’t Rush to Reach His Profit Target

This tip may be hard to follow when you’re paying a monthly subscription fee in the Trading Combine®, but Chi says pushing your goal only costs you in the long run. He speaks from experience, too, having failed as funded trader back in 2016.

And even though Chi has recently seen success, he says he’s still working on his discipline. For instance, he says he sometimes gets out of trades too early, or he sees an opportunity and tries to take a trade overnight. On average, this has not been profitable for him, but sometimes he gives in to the temptation.

What you can do: “Always stick to your trading plan and be disciplined in every trade,” says Chi. “We know that our system works, so we just need to follow like a robot.”

Setting a monetary goal seems like a good idea, but it sometimes cause bad results. See why in “This is How You Avoid Trading on Tilt.”

Ready to take your trading to the next level?