Mental Health and the Hour of Champions with Steve Werner 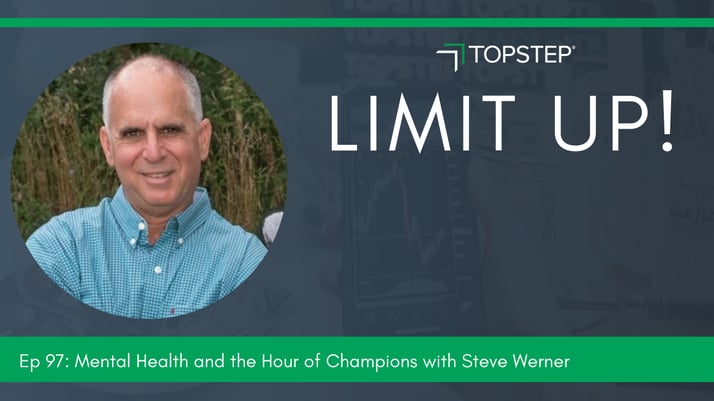 Steve Werner was a top commodities trader for 19 years before dedicating himself to his family business. But when the market crash of 2008 forced the company to shutter, Steve found himself adrift and suffering from major depression. On today’s episode of Limit Up! Jeff talks to Steve about his journey and how mental health concerns are a widespread issue in the trading industry.

Since the dark days of medicating his grief over the loss of his business, Steve has become a lifestyle coach for other high achievers struggling with negative thoughts and anxieties. Through his innovative program, Hour of Champions, Steve is helping people find their spirituality, physical fitness, and mental toughness.

Tune in to this week’s episode as Jeff and Steve have a frank conversation about mental health.

Steve Werner was a commodities floor trader for 19 years before moving on to Principal of Smith Rothchild Financial. The business was hit hard by the financial crisis in 2008 and was forced to close leaving Steve with lingering depression. While he initially tried to treat his mental health issues with medication, he found success in a regimen of spirituality, physical fitness, and mental toughness. He has since launched a program called Hour of Champions and coaches other high achievers to get out of their negative thought patterns.

Limit Up! Is hosted by Jeff Carter. Jeff is a general partner at West Loop Ventures. In April of 2007, he co-founded Hyde Park Angels and spearheaded the growth and development of one of the most active angel groups in the United States. He has consulted on the startup of several other angel groups. He is a former independent trader and member of the CME Board of Directors and was part of a small group that transformed CME from an open outcry exchange to the largest electronic exchange in the world. In 1998, CME was worth $182,134,000 in membership enterprise value.  Today it’s worth $55 Billion.