[VIDEO] How A Funded Trader Made Over $41K In One Day

In early September, we introduced you to a Funded Trader who was putting up some pretty big numbers. Corbett C., from Denver, has been part of the Topstep community for close to eight years now, so naturally, we were all curious about how, all of a sudden, he started catching so many big moves. That’s why we contacted him about coming in for an interview; to better understand his trading style and learn about which markets he looks at to catch such wide swings.

After paying close attention to the feedback we were getting from our community members, we decided to bring Corbett back for a second interview, this time diving a little deeper into the signals and indicators he uses to establish trade setups.

The accompanying article (below) will give a high-level overview of some of the key points Corbett makes, then we’ll break down his trades in the E-Mini S&P 500 futures from the day he booked more than $41,000 in profits. We encourage you to watch the interview a few times, if possible, to get a full grasp of how and why, after eight years of trading, Corbett is now able to confidently put on such big trades and hold on to them long enough to catch the big moves.

How to make $41,568 in Day Trading with a Funded Trader at Topstep

We’ve already said a few times that Corbett has been around for a while, and in that time, he’s studied and used a fair amount of technical indicators and proprietary trading signals. However, it’s been his experience that drawing a lot of lines and paying good money for someone else’s trade setups are no substitute for putting in the time to watch the markets day after day to get a good feel for their characteristics.

Today, he prefers to keep it simple and not muddy up his charts with a lot of stuff he doesn’t use. Volume Profile and maybe a few moving averages are all you’ll see on Corbett’s charts now. Other than that, he puts a lot of stock in using common sense and trusting his gut instincts to look for entry and exit levels.

Corbett also mentions an interest in game theory during the interview but doesn’t get too in-depth. In its most basic form,  to apply game theory to your trading strategy, you should have an idea of what you think a large number of other market participants are looking for in a trade setup, then use that insight to your advantage.

For example, let’s say you see a chart pattern setting up, and the trade entry level aligns with a moving average, so you decide to enter the market. This is a logical trade setup, and there are probably many other traders out there looking at the same chart and thinking about putting on the same trade. Using game theory, a trader will estimate the pain threshold for all of those other traders and use their projected stop areas as a low-risk level to enter a trade.

Again, this is game theory in its simplest form; it can get much more complex depending on the kind of data you can access. This is a popular tool used by quants and algo programmers, and typically requires a solid understanding of statistics, mathematics, and economics.

We went back to take a close look at Corbett’s trades over the last few months, and even though he’s been playing with big lot size, he keeps a very disciplined approach to risk management. It’s also interesting to note that he likes to go all-in and all-out using either 5 or 15 lots, depending on the setup, rather than scaling in and out of positions. Yet, he’s still able to maintain an average reward-to-risk ratio of 3:1, effectively keeping the math on his side. Keep that in mind if you’re thinking about swinging for the fences after reading this.

Corbett does NOT talk directly about using the VWAP in his interview. However, we know that a lot of you keep a close eye on it, so we wanted to give you a visual on how his trade setups often do fall in line with the VWAP.

On the 15-minute chart below, you can see that he entered his first trade in the ES during the overnight session on September 16 (for trade date Sep 17), but he didn’t just jump right in when the market opened. He gave the market time to establish itself; he waited for the trade to come to him and then executed a short position near the VWAP with calculated risk parameters. Because of his disciplined approach to trade entry, he took a minimal amount of risk. He was then able to ride the position for the night session duration, cashing in on 61 handles of profit in the early morning hours.

Corbett’s second trade came after the market had started to recover a little after the big move down. On the 5-minute chart below, you’ll notice that he initiated this long position on the way up after a nice pop on slightly higher volume; going with the flow and not fighting the tape; then exited the trade right at the VWAP. 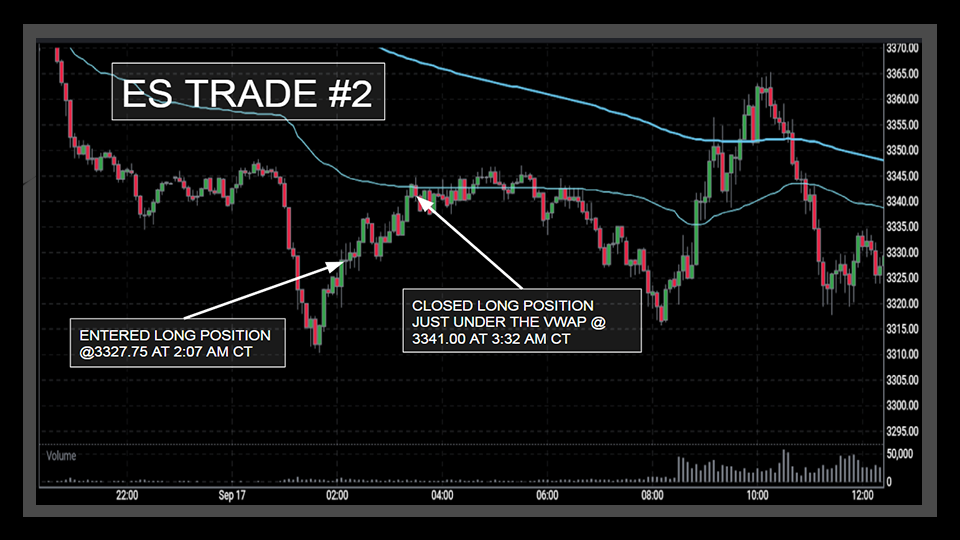 After making his first two trades during the overnight session, Corbett sat on his hands for most of the day session before making his last trade in the final 30 minutes of regular trading hours. He entered another long position as the ES extended above the VWAP on increased volume, then used the clock to exit the position just before 3:00 PM CT. 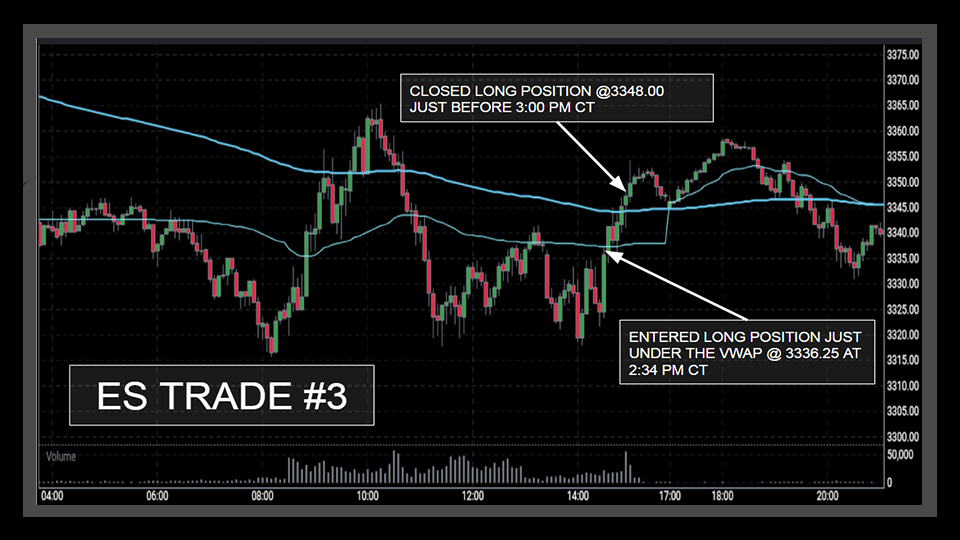 Please note that we did not include two other trades in the Crude Oil and 30-Year Treasury Bond markets totalling an additional $8,630.75 in profits in this breakdown.

Volatility creates opportunity, and as Corbett says, this is a great time to be in the markets. Bigger swings and wider ranges mean more chances to get in there and profit. We genuinely enjoy sharing our Funded Trader success stories with you, and we wish you all the best and continued success in your journey to becoming professional traders. If you have a story or trade of your own that you feel deserves notoriety, don’t hesitate to reach out to us, we’d love to showcase it!