This is Why the British Pound is Up 3%+ This Year 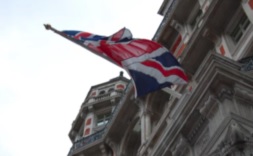 The theme heading into 2017 was one of worry. Many in the market were worried there was going to be something to be worried about, expecting factors outside of typical “norms” would dominate the global economy. Brexit was one of the first “shocks.” Then President Donald Trump’s election in November 2016 magnified these concerns.

A 2017 GBP/USD chart as seen on TopstepFX MetaTrader 4. It includes a 200-day moving average (red line) and a upward sloping trend line connecting lows from April, June, and August.

But that was the outlook on January 1, 2017; 365 days later, the view has changed. The worry has subsided. That’s not to say that Brexit isn’t a critical risk factor. In fact, it’s still the risk factor, but the paranoia is gone and has been replaced by optimism that a mutually beneficial Brexit solution will be reached.

Whether those expectations become reality remains to be seen. Important deadlines come in March and October, but expect news to trickle out at any point during negotiations. Each headline can accompany a move. The more sensational or surprising the headline, the larger the move.

Even though this is good trading advice regardless of the currency pair, we recommend not holding Sterling positions over the weekend and always having stops when you are not closely watching the market.