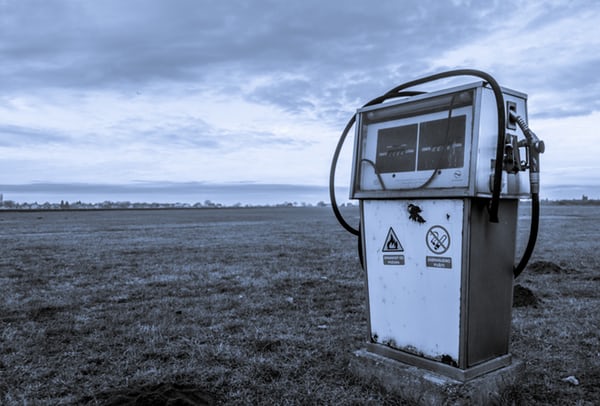 For those of you that know me, you know there are a few things that really get me fired up; gas prices being one of them. I drive a pickup truck, so let’s just say it is not the most environmentally friendly when it comes to burning gas.

My friends know I’m the one to call when it comes to hunting down the cheapest gas around. This is something my dad impressed on me as a kid; you may only be saving 10 cents a gallon, but over time it will add up to a whole tank of gas. So, to say I’m enjoying prices at the pump right now would be a major understatement.

That being said, it’s important to know that I’m not always crazy about crude oil dropping, and for multiple reasons; markets get incredibly tight, trading ranges shrink, and oil workers tend to start getting furloughed around $55 a barrel.

Currently we are trading in a very pivotal location around the $50.00 mark. Over the last 18 months we have seen the market come down to this level 6 times, and it has held 5 of those 6 times. The only time it broke below was in December of 2018 when it ran all the way down to $42 a barrel, the lowest price since August of 2016.

Right now I can see two things happening (no shit Dan that’s how markets work); it goes higher, or it goes lower… Well yes, it can be that simple, but what can really make it decide the direction it wants to go?

Tuesday’s API and Wednesday’s EIA reports will have a big effect on where crude oil prices can go. If the numbers come out as a small cut in production, or if for some reason a boost in production is made, we could see this market run to check out that $42 price.

Chances are people are still rolling positions from the last time we were down there. If those players decide to double down, then we may see a similar rebound, but if they bail we could see this market fall out of bed.

On the flip side, if we get a bigger cut in production (watch the API, the U.S. is now the largest Oil Producing Country in the world...WOAH), then buyers will come in fast and we’ll start to see the elevator on express up to that $55 mark.

Now, obviously this is all my opinion, but this is what I’m going to be watching for very closely. Looking for pullbacks to enter and keeping stops tight. DON’T fight the momentum, DON’T step in front of the train and be patient. ALWAYS trade what you see, not what you think might happen.