Crude Oil Advances on Geopolitical Unrest, But Turns Away from Key Resistance

Crude oil prices moved higher Monday as events in the Straight of Hormuz continue to raise concerns about possible disruptions in supply. Yet, at $56.25 per barrel, prices remain well below levels of more than $60 seen just two weeks ago. In fact, sentiment seems to have turned somewhat bearish due to concerns about a weakening global economy and waning demand.

Oil prices had fallen sharply until Iran said it seized a British oil tanker late last week. From July 12th through Friday, September crude dropped from $60.40 to $55.75 – a quick five-day 7.7% losing skid (Figure 1). Then, crude found its footing Friday and began a climb to more than $57 on Monday after the Islamic Revolutionary Guards Corps, which is charge of Iran’s naval actions, said it took control of the British oil ship for rules violations. 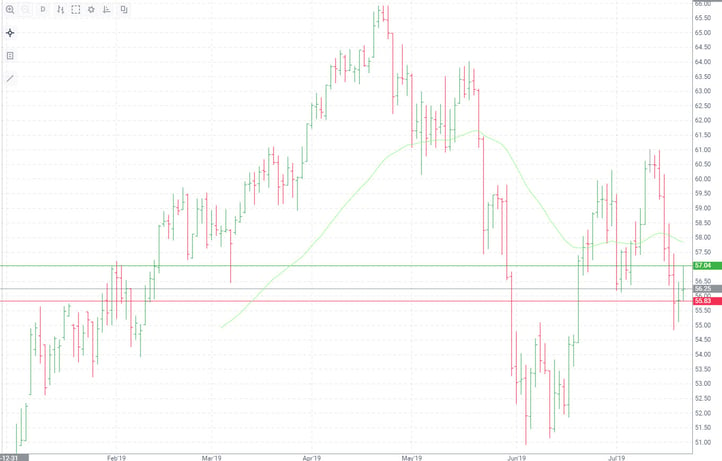 The seizure of the British oil tanker is just one of a string of episodes that have raised concerns about potential disruptions of oil supplies in this key waterway.  Here’s the timeline:

Since the Straight of Hormuz, which is just 21 miles wide at its narrowest point, is the main route for the transport of Persian Gulf oil, escalating conflict in the area is raising concerns about supply disruptions.  Roughly 20% of the world’s oil supplies travel through the passageway.

Crude oil’s move to $57 Monday was short-lived and prices eased back towards the $56 level in afternoon action. Commentary from the International Energy Agency (IEA) possibly eased some of the supply concerns. The Paris-based group said that it's closely watching developments in the Strait of Hormuz and is ready to act to keep crude flowing.

"Consumers can be reassured that the oil market is currently well-supplied, with oil production exceeding demand in the first half of 2019, pushing up global stocks by 900,000 barrels per day," according to a statement from the agency.

Meanwhile, the decline in crude oil from more than $60 since mid-July also reflects uncertainty on the global economic front. While OPEC decided earlier this month to maintain production cuts (while sanctions against Venezuela and Iran have removed 1.5 million barrels of daily supply) increasing US production is making up for some of the shortfall. Of course, the ongoing US-China trade war is resulting in weaker demand for crude oil from many of the now weakening emerging economies.

In the end, there are many factors at play right now and crude oil will likely remain volatile as news events unfold. The first sign that a legitimate reversal is at hand is a move beyond $57. Then, $58 per barrel and the 50-day moving average are key levels to watch, as well as recent support/resistance levels at $55 on the downside and the $59.50-60.00 range to the upside.